Just ten weeks to go and then the United Kingdom of Great Britain and Northern Ireland (UK) will secede from the European Union (EU) without a post-Brexit treaty in place. Although we haven’t arrived at that point yet, this worst of all scenarios has certainly taken on shape and substance in recent weeks. Scant progress has been made in the negotiations between the UK and the EU, and the rhetoric from London has become all the more petulant in response. Compromises on the most pressing issues must now be reached soon in order to bring a deal home before the deadline. We place the probability of this best-case scenario coming to pass at only around 40%. We present you here with a Brexit update.

The clock is ticking

Both sides have spoken, but neither side has budged much. In the wake of the EU summit on October 15 and 16 and UK Prime Minister Boris Johnson’s subsequent decision to step on the brakes but not (yet) break off negotiations, the future of trade between the EU and the UK hangs in the balance. It is still possible for a treaty to be struck, but the likelihood of a deal being reached seems to be fading further with each passing week. If we take the declarations from the EU and the UK at face value, this would imply that both are now waiting for the other side to soften its position first. If one side broaches a compromise to the other, skillful diplomats could still hammer out a solution behind the scenes, but such a step would require political will.

Judging by the meager progress made in the weeks before Boris Johnson suspended the negotiations last Friday, a potential deal could contain three elements:

A few problems, however, appear to stand in the way of such a treaty. For one thing, France is balking on the fishing rights issue, on which French President Emmanuel Macron refuses to compromise with the British. The dispute settlement issue could prove to be another stumbling block. Now that the British intend to pass a law giving the UK parliament the explicit right to break some of the country’s obligations agreed to since January to carry out border and customs checks on goods transported between Northern Ireland and the British mainland, the EU is insisting on an especially robust dispute settlement mechanism that would recognize the European Court of Justice as the final arbiter of EU law and EU regulations. The negotiations are additionally complicated by the fact that both key players, Johnson and Macron, are under pressure at home due to their (dicey) handling of the pandemic, which constrains their ability to make compromises. Johnson is particularly being watched with scrutiny by the influential hard-line Brexit wing of his Conservative Party, which insists on the UK regaining its “full sovereignty”. Even if Johnson wanted to make concessions on equitable competition conditions and dispute settlement procedures, it would be hard for him to accept elements modeled on EU rules and structures.

Who needs to take the first step?

Both sides would like to reach an accord. But who will make the first move to avert the UK and the EU from going over the cliff together on December 31? Despite several varied nuances within the EU, the European community of states is likely to stick with a unitary negotiating position because preserving the coherence of the EU27 remains its top priority. The tussle over fishing rights, which could amount to around EUR 700–800 million per year, is ultimately unlikely to be a deal breaker for mainland Europeans. A gradual constriction of EU fishers’ access to UK fishing grounds over a period of few years coupled with generous financial compensation for those EU fishers who draw the short straw would probably do the trick. But before other EU heads of state and government can set about persuading Macron to swallow that bitter pill, they would first have to see that the UK is clearing the way for an agreement on the more important issues of equitable competition conditions and dispute resolution. And one or more of them will likely recall that Johnson already once suddenly flip-flopped (for the better) at the end of last year under severe pressure and may thus infer that his final word probably hasn’t been spoken yet.

The EU therefore still sees a reasonable chance of reaching an agreement with the UK on future relations. The EU would like to stay on good terms with the island nation, which will remain a close neighbor and key partner in numerous areas that go far beyond economic and financial matters, and would like of course to minimize the economic harm. But from Brussels’s standpoint, the onus to make the first move is back on the UK these days, just like it was at the end of 2019, because it was the UK that decided to leave the EU and refused to prolong the transition period beyond the end of 2020. And last but not least, the smaller UK has more to lose under a hard Brexit than the EU does.

A healthy dose of diplomacy on both sides and a helping hand from the EU might be required to give Johnson a feasible, face-saving way out so that the negotiations can resume. But after five years of yammering and occasional bad behavior from London (at least from the EU’s perspective), there’s a risk that the European common market’s heads of state and government may be inclined to hold steadfast. A no-deal outcome thus remains more than just a residual risk.

All predictions about the final episode’s ending are fraught with a high degree of uncertainty.

Time is slowly but surely running out – there are now just ten weeks left until the end of the transition period. The necessary compromises would probably have to be reached within the next two to three weeks in order to get a treaty ratified before the end of this year. Only then would there be sufficient time left to clear up legal details and to translate the definitive wording of the treaty in all relevant languages by the end of November at the latest. If the EU representatives see a good chance of reaching an agreement, they perhaps may even be willing to continue negotiating well into December. While the ratification of a treaty in that event would get pushed into the new year, in the meantime the EU could enact key elements of the accord on a temporary basis. Then in many matters, one would only have to resolve to continue to uphold the currently valid transitional trade practices between the EU and the UK until a treaty is ratified.

How probable is it that…?

The many twists and turns in the years-long Brexit dramedy have made one thing clear: all predictions about the final episode’s ending are fraught with a high degree of uncertainty. Nevertheless, percentage odds on the possible outcomes are very much in vogue, as they often are in the face of such momentous (geo)political developments. So we, too, are quoting percentage odds for the three main possible scenarios:

And what about the British pound?

Although the Brexit theme has long since ceased to play a major role on the equity markets, it remains the prime driver of risk to the British pound. At its current exchange-rate level of around 1.30 against the US dollar, the British currency is hovering in the middle of its trading range seen over the last three months. This means that the currency market is more or less pricing in our second scenario at the moment, which would give sterling upside potential in the event of a last-minute agreement. The uncertainty premium priced into the pound could then decrease a bit, and the currency’s model-implied undervaluation could pull back mildly. The upside potential, however, would be limited even in the positive scenario because even in this case, the UK’s weak economic growth (also due to COVID-19), its ultra-accommodative monetary policy and its current account deficit do not make for a strong pound. Sterling would have greater potential under the adverse “hard Brexit” scenario, but that potential would be on the downside. The pound’s drop height would be substantial and would likely amount to 8% to 12%, and the currency could even retest its March 2020 low. But at that level, the cheap valuation would likely come back into play and help put a floor under the pound. 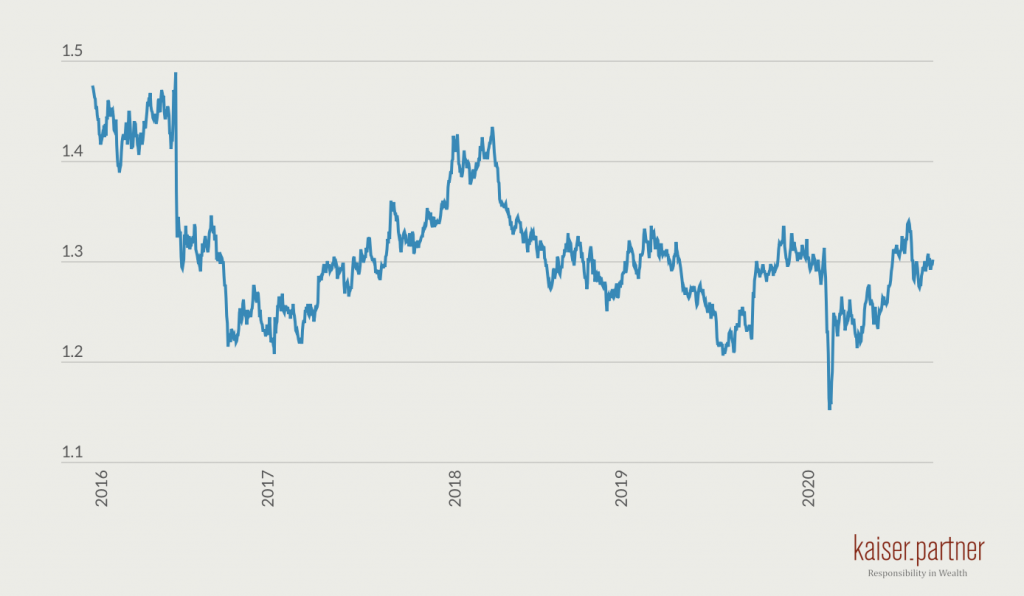 Thank you for subscribing to our Newsletter
Check your inbox and confirm the subscription.