Trump vs. Biden: It all hinges on the economy

The finish line is in sight in the race to move into (or stay in) the White House. Democratic challenger Joe Biden continues to lead in the polls, but Donald Trump has recently gained some ground on him. From the perspective of voters and investors, the most important plank in both candidates’ campaign platforms is their economic policy agendas. The differences, however, in the economic duel between Trump and Biden lie within fairly narrow bounds, aside from on the issue of taxes. What’s limitless, in contrast, is the outlook for US government debt, which looks set to continue to balloon.

The US presidential election race enters the final sprint in the weeks ahead. Various opinion surveys and online betting markets show Democrat Joe Biden still leading President Donald Trump at the moment, but Trump has regained some ground in recent weeks. The outcome of America’s 59th presidential election will likely point the way forward for US domestic policies and global (geo)politics. But the candidates’ economic policy agendas are also especially relevant not just for financial markets and investors, but also for voters, who cited the economy as the most important election issue ahead of the pandemic in a recent, closely watched National Public Radio poll. But the aforementioned survey also contained some bad news for Joe Biden: a slim 47% plurality of voters still believe that Trump is better for the economy than Biden, who scored a bit lower at 45% on this issue. The president’s advantage in this area has shrunk since last spring, but despite a double-digit unemployment rate and a record-high federal deficit, Trump still continues to lead on the question of which candidate would handle the economy more skillfully.

Is Biden’s lead big enough?
Trump has been catching up lately

Probability of presidential election victory, in % 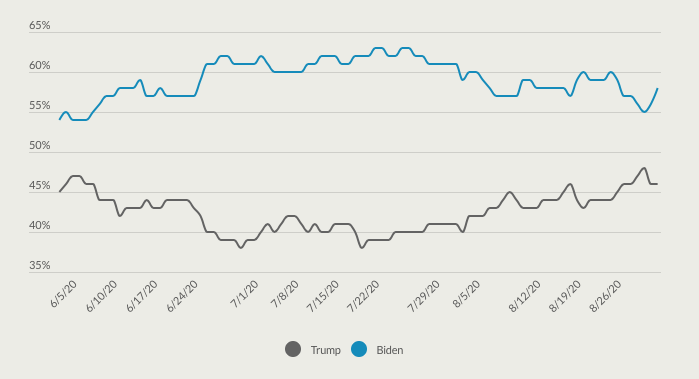 On the matter of what US citizens can expect from a second Donald Trump administration, one thing arguably remains indisputable: four more years of (foreign) policy missteps, never-ending personnel reshuffles and, of course, non-stop tweeting. But the 50 “core priorities” in Trump’s campaign platform presented in late August at the Republican nominating convention also consist mainly of classic Trumpian standbys and little else new. A break with China, promotion of “Made in America” and a restrictive immigration policy are key planks in the platform. At the top of the to-do list is the goal of creating ten million new jobs within ten months. That may sound like a lot, but it actually isn’t particularly ambitious given the decimation of employment caused by the COVID-19 pandemic, which has cost the US economy more than 13 million jobs since February.

Make America great again?
Economic acumen is called for more than ever 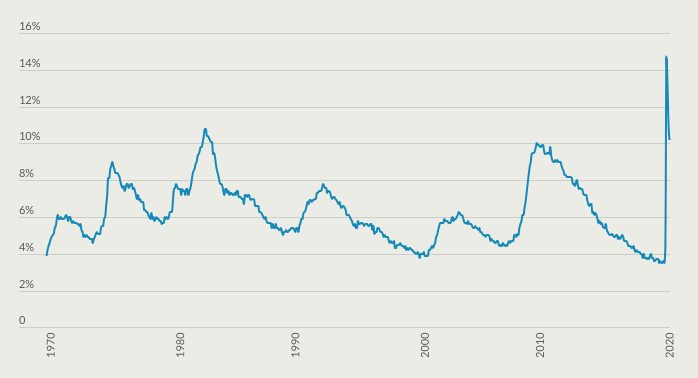 Trump’s agenda delivers details on his anti-China policy, which aims to bring a million manufacturing jobs back to the USA from China. Tax incentives beckon for companies that manufacture “at home” and/or repatriate jobs from China to the United States. Whoever outsources to China, in contrast, would no longer receive government contracts. Moreover, all critical equipment items, such as for the healthcare sector for example, are to be manufactured domestically. These platform planks mark a seamless continuation of Trump’s protectionist agenda over the last four years just as much as they constitute a break with the Republicans’ longstanding prevailing party line in favor of international free trade. The spiraling mountain of public debt also previously would have been a major issue for Republicans and their presidential candidate. Trump’s agenda, however, makes no mention of plans to pay down debt. The president and his party find common ground in their intention to further cut taxes. This is one of Trump’s few distinct counterpoints versus his Democratic rival.

…or higher taxes under Joe Biden?

Joe Biden, after all, is running on pledges to raise taxes, especially on the wealthy and corporations. His stated plans include raising the top marginal personal income tax rate from 37% to almost 40% and lifting the tax rate on corporate earnings from 21% to 28% in order to generate around USD 3 trillion of extra tax revenue over the next decade. How feasible those plans are in the face of the economic crisis is an entirely different matter, though. Biden, however, backs away from an explicit wealth tax, thus distancing himself from Elizabeth Warren and Bernie Sanders, his politically more radical contestants in the primaries. Biden’s agenda is also more moderate on the issue of healthcare (expanded coverage yes, but no “Medicare for all”) and with regard to the technology goliaths from Silicon Valley. Although Biden, too, holds a critical view on their market power, he doesn’t advocate breaking them up. This specific point isn’t trivial for investors and shareholders considering that the equity bull market over last eleven years was led by these very same tech giants. From this perspective, a change in the White House wouldn’t necessarily put an end to the rally. 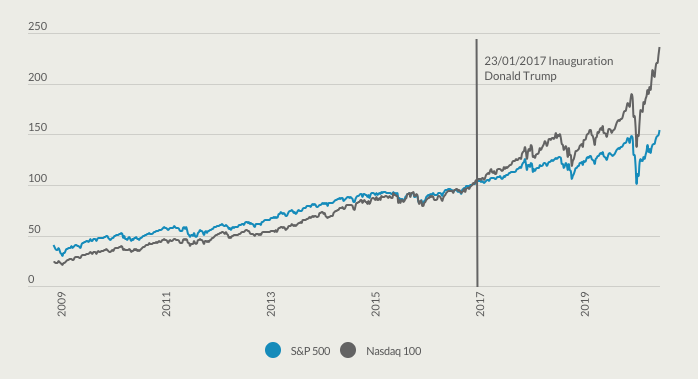 In the area of trade policy, the Democrat doesn’t differ notably from Trump along fundamental lines. Biden, for example, endorses a “Buy American” policy that instructs all public procurers to source domestically produced goods and services. Biden presumably will be more conciliatory toward China, which is still the USA’s biggest trading partner, even though he feels obliged to toughen his rhetoric at least during the election campaign. But even under Democratic leadership, the “cold war” with the great Asian power wouldn’t simply come to a halt because Biden, too, views Beijing’s expansion aspirations in all areas ranging from technology and raw material supply to asserting sovereign territorial claims as a threat to the USA. Unlike Trump, however, Biden may try to recruit allies to pursue a common policy on China. Through decades of diplomatic activity as a vice president and senator, he has built up plenty of international trust to make that happen. While a President Biden would have far-reaching powers in foreign- and trade-policy matters, on most other issues he would need the cooperation of Congress. He could get such cooperation if the Democrats win a majority in both chambers, which is not a certainty in the Senate from today’s perspective. Some of Biden’s campaign pledges are thus conditional against this backdrop.

One thing for sure: Lots more debt

Be it Biden or Trump, whoever takes the reins of government in Washington D.C. at the end of January 2021 will face an enormous budget deficit, a gigantic government debt load and an economy in rehab. The Congressional Budget Office (CBO) projects a federal budget deficit of USD 3.7 trillion for 2020, which doesn’t factor in the next coronavirus relief package that Congress is still negotiating. The Democrats are clamoring for an additional USD 3 trillion while the Republicans don’t want go above USD 1 trillion. An agreement, though, is likely to be reached soon, largely for election campaign reasons. The US budget gap will widen even further as a result.

Continuing the trend seen in recent years, federal spending looks set to exceed revenues well into the future. US federal debt is now expected to rise to more than 100% of gross domestic product by the end of the current year. As recently as March, the CBO did not expect such a large mountain of debt until after 2030, but the pandemic has since rendered initial estimates obsolete. There are no indications that the US Treasury may have difficulty raising new debt, largely because the US Federal Reserve is diligently buying up US government debt securities on the open market. But direct central-bank purchases of government debt would not be a healthy development. Although the US dollar remains the undisputed world reserve currency (for which there is currently no alternative), its status could start to totter if US finances get further out of control. A longer-term threat to the greenback’s reserve-currency status ironically comes from China, where the government is pressing ahead with plans to introduce a digital currency.

Limitless
The USA’s mountain of debt will continue to grow

US yields at all-time low

Thank you for subscribing to our Newsletter
Check your inbox and confirm the subscription.